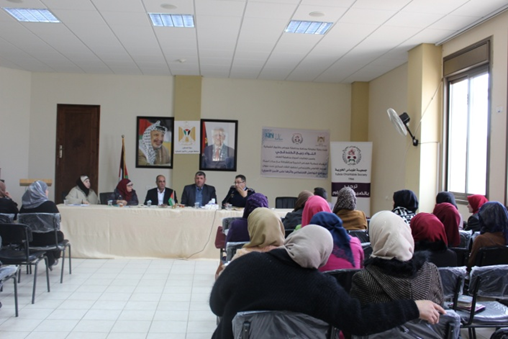 Under the patronage of the Governor of Tubas and the Northern Valleys Rabih Al-Khandakji, Tubas Charitable Society commemorates the week of combating violence against woman by holding a central meeting under the title '' The impact of social media on families' security '', in partnership with the Women's Center for Legal Aid and Counseling, with funding from Dorouz Foundation and the police, and the presence of 30 women from Tubas and a number of official and private institutions.

First of all, the lawyer Ghada Shadid starts the meeting by greeting the audience and the National Palestinian peace, then reading Alfatiha for the souls of the martyrs. After that, The head of the society Maha Daraghmeh thanked the partners, emphasized the importance of concerted efforts to serve the Palestinian women's issues.
In addition, Mr. Abdullah Daraghmeh in his speech on behalf of the governor of the society emphasized the importance of the subject and its disadvantages on the Palestinian society.

Besides, His eminence the sheikh Hassan Shehada talked about marriage and its pillars and the most important brick in it for the stability of family. Then, he spoke in details about divorce and the impact of social media on increasing the number of divorce cases and its consequences like, family disintegration, social disease. After that, he highlights the necessity of protecting individuals and the role that upbringing plays in protecting them from the negative effects of social media.

What is more, the brigade Mujahed Rabaia, the head of public relations in Tubas police spoke about electronic crimes as processes of extortion and its two divisions the internal in Palestine and the external and how to deal with it. The external extortion is the most difficult because it is hard to control because it stems from organized gangs. He mentions that, the most prominent form of electronic crimes is financial crimes. Then, he confirmed that the individuals are the main target of the electronic attack that the mobile and the computer are the main tools of this attack which doesn’t need a high technical experience like, fraudulence, identity theft, information warfare, Phishing, and mentioning real life stories occurred in Tubas and West Bank supported with statistics. After that, he recommended the need to take caution and resorting to closest people like family, police, or society for a help in case of problems.

At the end of the meeting, the lecturers answered the questions of the audience and a number of recommendations were asked including, the concentration of efforts between institutions to raise awareness among all sectors of society about the danger of social media and the necessity of informing preachers about the importance of talking about the subject. His eminence, sheikh Hassan asserts his role in holding a training course for mosque preachers to reinforce the subject.