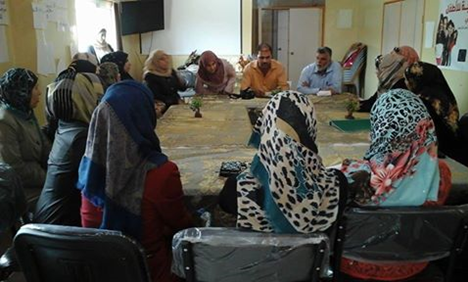 The Environment Educational Centre, theEvangelical Lutheran Church in Jordan and the Holy land, and the Tubas Charitable society,in collaboration with the Ministry of Media,held adiscussion on Mondaybetween the activistsof the ‘Environmental Sawsana’ forum and the Tubas municipality board.
The activists in the interactive discussion spoke about the obstacles and challenges facing the cityin front of the municipal member Hatem, and listened to the answers to the local authority official, who dealt with discussing the municipality's efforts and its role in dealing with the environmental and health files.
Forodos Abu Ara along with Idram Abu Haija’, AyatSuliman, ImanMubaslat, Ala’aSobh, FatenDaraghmeh, NadyaSwafta, Ala’aSwafra and 12 other women provided a list of the obstacles and challenges that is faced by environmentally in their city. They also summarised their concerns on the absence of a sewage network, the spread of mosquitoes,rodents, and snakes in the center of the old and dilapidated houses, and the repercussions caused by the Jericho fly. The concerns were in addition to unhealthy practices of butchers;the lack of recycle bins  in the northern Safeh area;large spacing between bins in the city center; lack of public parks for children in Tubas;a proliferation of stray dogs;infringements on the sidewalks bylarge stores; andthe diminishing of green spaces. Swafataexplained the Municipality Agenda regarding Environmental issues, and he said it was seeking accordance with its available capacity to deal with it responsibly, pointing to a defect in the general orientations of citizens in general about the environment issue and their interest in it compared to other issues. He also talked about the sewage network project, (which was supposed to begin its first stages this month, but a lawsuit from the company that had competed for the tender had caused the start of the work to be postponed until June 2nd,)which has found that alternative solutions to sewage water and other waste has been causing many environmental problems.

Swafta explained the reason for not dealing with existing buildings; the nature of the property taking place; pointing at the efforts of the local council in partnership with the Joint Services Council, and the competent authorities to make Tubas clean and free of waste. He elaboratedthat the municipality had commissioned a review of its street cleaning practices, which found that it is ineffective,  so the council has now put it on their agenda to commission a new approach. Swafta promised the 'environmental Sawsana' activists a follow-up to deal with the demand that he’ll receive from the women, and present them officially to the municipal agenda, and represent support to the initiatives that will be launched, accordingly with the municipality potentials. It should be noted that the municipality has already begun to establish a public park in the bush area of 25 acres in the first phase, to the benefit of the city.
The participants suggested that there should bea warning system for those causing pollution and involved in throwing random waste and incinerating them. They have also requested to spray the city's neighborhoods with anti-mosquitos and anti-flies, fight against stray dogs, and treat the sewage water and the threats caused of the fall of the crumbling houses in Dura .
The Executive Director for the 'environmental education' Simon Awad pointed out that women's forums in the provinces of the countrycontribute to the strengthening of community and civic participation, through open dialogues with officials and decision-makers.
In the minutes for any other business for discussing environmental challenges facing different cities and towns and finding solutions to them through eco-friendly initiatives, without criticising the difficult reality in which they live, under occupation.
Awad said that preserving the environment is an individual and collective responsibility of all Palestinians and discussing on the environmental issues cannot postponed;  not paying attention to it will inevitably make it worse
The head of Tubas Charitable Society pointed out that the 'environmental Sawsana' was established last year, and it intersects with the charity’s efforts in making a kindergarten-friendly environment, an initiative that was which was launched in 2013, that was able to graduate three generations carrying green concepts, these concepts can be built even more and strengthened, leading to an environmental awareness. She stressed that need for women to carry their demand to the council, and tofollow the process of implementing them .